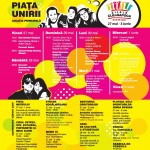 2011 marks the 1st edition of the annual Days of Cluj Napoca festival. The celebration promises to be a great opportunity for visitors and locals alike to discover the beauty of our city and to participate in a wide variety of creative activities and interesting events. Whatever your interests may be, one thing is certain: there will be a celebration in every park, market and neighborhood in Cluj. Every street corner offers something different to explore. 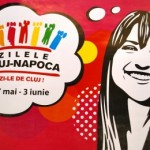 Apart from the main event there will be some other activities to attract a different kind of public. There will be live concerts and modern dance demonstrations for a younger audience. There will also be photographic exhibits, a puppet-show, face painting, and street animation.  In addition to all of that, there will be a beach volley tournament, martial arts, handball, basketball and all kinds of sporting events. As you can see, a wide variety of events have been planned to please visitors of all ages and interests.

Mihail Kogalniceanu Street: A culinary challenge will take place on 28 May. Adi Hadean, a well-known blogger will create a 100-meter skewer made of chicken meat, sausage and vegetables. This colossal shish kebab is rumored to become the largest skewer ever created.

Tailor’s Bastion (Bastionul Croitorilor): Some of the events that can be attended Tailor’s Bastion include an art exhibition and performances of works by William Shakespeare. There will also be several workshops for you to enjoy. Be sure to catch the highly acclaimed Torch-Dance Parade!

Other activities will also take place at the following locations: Potaissa, Inocentiu Micu Klein, Citadel wall (all of them being located relatively close to each other), the Student Culture House (Casa de Cultura a Studentilor) as well as at Memo 10 (the City Hall restaurant).

Don’t fret the end of the activities, though!  There is always something going on in the city.  As the Days of Cluj Napoca festivities draw to a close, the Transilvania International Film Festival will begin, running from 03 – 12 June.  The festival will start at the Student Culture House and will continue in the major cinemas throughout the city.

Celebrating  the Days of Cluj-Napoca

This is the program for the First Edition of the “Days of Cluj-Napoca” event:

Throughout the event period there will be medieval knights participating at the Medieval Festivities taking place at the Tailor’s tower. They can also be found later on in the I.L. Caragiale Park together with street performers as well as other guests that wish to participate.

16:00 – The Cluj;s sports parade: the Cluj-Napoca sports-club juniors will start of the parade at the Peace Square (Piata Pacii) and head towards Union Square (Piata Unirii).

17:00 – Official opening of the “Days of Cluj-Napoca” festival, followed by:

18:00 – Folk Concert by the popular school of arts “Tudor Jarda”

12:00 – Opening of the ONG Transilvania Festival*

* The two manifestations will take place every day throughout the duration of the festival event.

19:00 – Opening of the “Medieval Celebration” that will take place throughout the week. You will be able to attend a crafts fair, the apple market( apples and traditional products), a painting exhibition with the theme “Medieval Architecture”, medieval tapestry exhibition,  a guild banners exhibition as well as a traditional dolls theatre.

There will also be daily screening of British documentaries for the duration of the event at 12:00 and 14:00.

Saturday, 28th of May

Starting at 8:00 at the botanical garden: There will be a guided tour taking place. A young PhD will be holding a case study on the birds in the botanical garden. A study like this has not taken place since 1977 making it quite a unique and worthwhile experience.

Starting at 10 at the sports hall: Sports marathon encompassing street ball, volleyball, handball and cycling competitions as well as martial arts demonstrations. These events will take place all the way through Thursday.

On Saturday the street ball competition will take place. Both male and female divisions.

Starting at 10 at the Students’ culture house: there will be a Fair taking place called: discover the brands of Cluj”.

Between 10:30 and 18: the reconstruction of the antique “Napoca” citadel will take place. With the help of the Virtus Antiqua association and the Museum of History. Period costumes, craft workshops and gladiator fights can be found here.There will also be a presentation of the ruins done by historians.

Starting at 13:00 The parade of literary characters: Small show organized by the Writer’s Union and School Inspectorate. There will be prizes given consisting of books for the best costumes.

Treasure Hunting competition finals  ,,Discover the treasures from the heart of Transylvania’’

– Open space projections ,,Steps of the Poet  in Cluj’’

16:00-Museum Square-puppet show ,followed by the concert of the irish band Shamrock ,next  theatre show;

11:00-The Winner Awards for the high school competition ,,The architects of the future -Cluj

Napoca in the year 2020 ‘’competition

-Cluj Opera Festivity – with the participation of the National Romanian Opera Orchestra and Hungarian Opera,choirs;In the schedual :pieces and choirs from famous Operas and Operettas

-The events will be continued on  Mihail Kogalniceanu street,at the Taylors Tower,I.L.Caragiale Park, Old City Wall,and at Florin Piersic Cinema ;

17:00-Museum Square-show performed by the ,, Viceversa’’theatre Company at the Cluj-Napoca Municipal Culture House

21:30-the German Cultural Center in organising  short projections on the buildings in the historical center;

In the Unirii Square we will be celebrating the day of traditional  music and dancing ;

17:00-Museum Square- concerts series.The night will start with a medieval music concert,and will  be continue with a concert performed by the irish band Shamrock ,followed by an Italian band  (L-altra Italia).the two bands will be playing at the Days of Cluj as a result of their collaboration with the British Council  and The Italian cultural center ;

In the afternoon the adults are taking over the Museum Square again.Cocerts will be held by local artists Raluca Vidican Mute and Maya

The Italian cultural center will Be preaped with cartoons,and The French Cultural Center will host short movie projections for children.

10;00 -The traditional parade dedicated to the event ,,  I like Cluj Napoca Clean ‘’awards

Brush Factory- conference about the city,culture, development,from the perspective of the ,,Cluj Napoca in 2020-European Cultural Capital’’ project

After the concert there will be a 3D projection on the rouf of the Student Culture Hall followed by a TIFF (Transylvania Film Festival) avanpremiere.

3D projections in the public space represent a premiere for Cluj Napoca and at this magnitude/level  for Romania.

Also this is the last day for the cooking event that will be held by Memo 10,The Mayor ‘s restaurant.

17:00 @  Mihail Kogalniceanu Street The Bloggers of Cluj will try to beat the record for the longest Skiwer