Here are a few of the major events that are happening this summer in the European Youth Capital Cluj-Napoca. Even if you are here during the week or during dates that we didn’t mention an event in this blog, Cluj never sleeps and has frequent concerts, festivals, and workshops organized. There are weekend where four or five festivals are going on and it is a challenge to pick one. We hope you guys will have a great time in this amazing city, Cluj-Napoca. 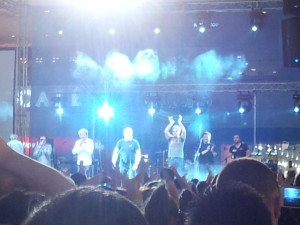 Cluj Days is a great period of the year when the beauty of the city is blooming in the most original way, in Piata Unirii (The Union Square), Piata Muzeului (The Museum Square), Central Park, Potaissa Street and M. Kogalniceanu street. Starting with “The Cup Song” a dance performance of the pupils from schools of Cluj on the rhythms of famous Romanian singer Alexandra Ungurenu & Crush.

Continuing in the night with concerts of the bands as: Vunk, David & The Six Martini Band aaaand, in the end, the dearly beloved Romanian rock band Iris, which, for the first time in their long career will be on the same stage with Dan Bitman, from Holograf and Felicia Filip – two unmistakable Romanian singers. Join us for these concerts at Transylvania Hostel. 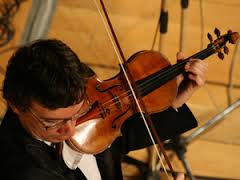 The second day (23rd of May) is dedicated to the classical music, where from 18:00, Alexandru Tomescu will bring the famous Stradivarius Elder – Voicu violin – one of the best preserved Stradivarius violins. But this is not all, the surprise of the night is the Russian pianist Eduard Kunz. The chosen repertoire is ENESCU EXPERIENCE, 2015 being the 60th year since George Enescu is playing music in heaven.

On Sunday (24th of May) the traditional Romanian music will be interpreted by some of the best and well-known Transylvanian performers, such as: Mariana Anghel, Dinu Iancu Salajanu, Dumitru Farcas, Cristian Pomohaci, Nicolae Furdui Iancu, Sava Negrean Brudascu, Aurel Tamas and many others. 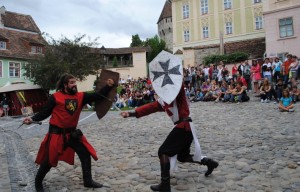 medieval knights fighting in the square

In the Central Park, where the center of the fun is going to be, you can take part in many outdoor activities, such as canoeing, archery, slackline etc. The most interesting and original idea is kept for the end, so to close the event, brilliant minds of Cluj-Napoca decided to make this project called SCENA VERDE, which is a floating stage on the lake of Iulius Park and the brave thing about it is that it’s made of recycled plastic bottles. On this stage, you can see music performance, musical and ballet, of Orchestra Simfonica Philharmonia Napocensis with the soprano Stefania Barz, the tenor Marius Vlad Budoiu, mezzosoprana Iulia Merca, basul Kopeczi Sandor. Dirijori: Petre Sbarcea si Dalma Kovacs. 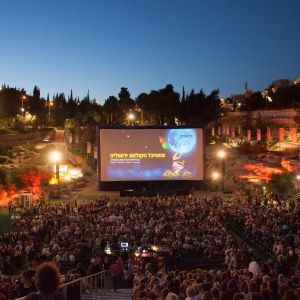 One of the most popular film festivals in the whole wide Universe (known and unknown) will take place in the European Youth Capital this year, starting on the 29th of May. You should not skip it! Already in the 14th edition, Transylvania International Film Festival is the first international feature film festival from Romania. The festival has been founded for the purpose of promoting young filmmakers, but also to help the distribution of the European cinema, hold seminars and workshops on film production and give a taste of fine quality cinema to the audience. Thus, the festival focuses more on independent movies and domestic productions. Foreign film directors and actors are invited to present their productions within the festival and over the last 13 years, Cluj has hosted some important names of worldwide cinema, like Julie Delpy, Mihael Radford, Claudia Cardinale, Wim Wenders or Jacqueline Bisset. This edition of TIFF will be opened by „Wild Tales”, an Argentinian dark comedy that was nominated for the foreign-film Oscar. The screening will start at 8:45 PM in Union Square (Piata Unirii). The movies will be shown at all of the centrally located cinemas in Cluj-Napoca. Additionally, the viewers can enjoy open air cinemas in Union Square, Manastur Open Air and Banffy Castle, Bontida. The tickets can be purchased at any of the cinemas in the city. You can see movies like Magical Girl (r. Carlos Vermut), Vie Sauvage (r. Cédric Kahn), Life in a Fishbowl (r. Baldvin Zophoníasson), In the Basement (Ulrich Seidl), The Fool/ Durak (r. Iuri Bîkov) etc. 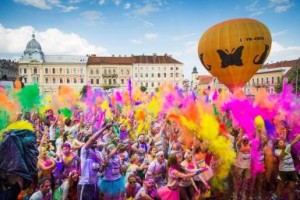 It’s all about health, joy, originality and a little bit of craziness! That’s what Color Run is. This is not a timed event, and at every step you will run through a colored cloud of powder that will turn you into a walking rainbow in the end. The coolest thing is that the race will end with a party full of colors! The start line is at Union Square, where everyone will start out dressed in white. The white t-shirt and all the necessary products will be given by the organizers. The participation fee is only 80 lei and you can subscribe following this link: http://thecolorrun.ro/cluj/ 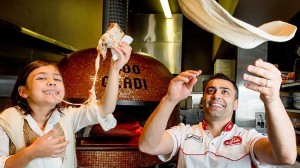 At the Banffy Castle in Bontida you can experience a unique mixture of local beauty and history combined with urban activities like workshops and extreme sports and a large variety of electronic live music set on 6 different stages. Despite being relatively new (this is only the third edition!) the Electric Castle Festival has become one of the largest music festivals in Romania and has already been shortlisted for the Best Medium Sized Festival at Festival Awards. The line-up includes names like The Prodigy, Rudimental Live, Parov Stelar, The Cat Empire, Fatboy Slim and other well known artists in the electronic music scene. The price for the tickets will be 339 LEI (77 euros) and can be bought online or at some selling points in Cluj like Atelier Cafe, Boiler Club or Booha Bar. Despite the fact that Bontida is about 30 km from Cluj, there will be regular buses going between the 2 locations once every 10-15 minutes. Additionally, there is a train leaving every hour towards Bontida. 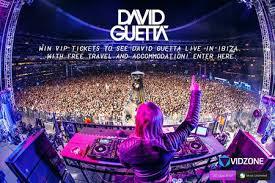 Nearly sold out before the performers were even announced, the Untold Festival is one of the most anticipated events of this year in Romania. Artists such as AVICII, DAVID GUETTA, ARMIN van BUREEN, DIMITRI VEGA&LIKE MIKE and many more will take the stage. This great festival is going to be held on multiple stages in Cluj Napoca: The Union Square which will become “The Citadel”, “River Area” that will have 3 stages, The Central Park which is going to become “The Forrest” and “The Pool Area” with many pool parties. The price for a 4 days ticket starts from only 312,12 lei and you can buy it online from Eventim.ro